Posted on April 22, 2016
by Yasushi Okamoto (Editional Board of NPO no Hiroba) 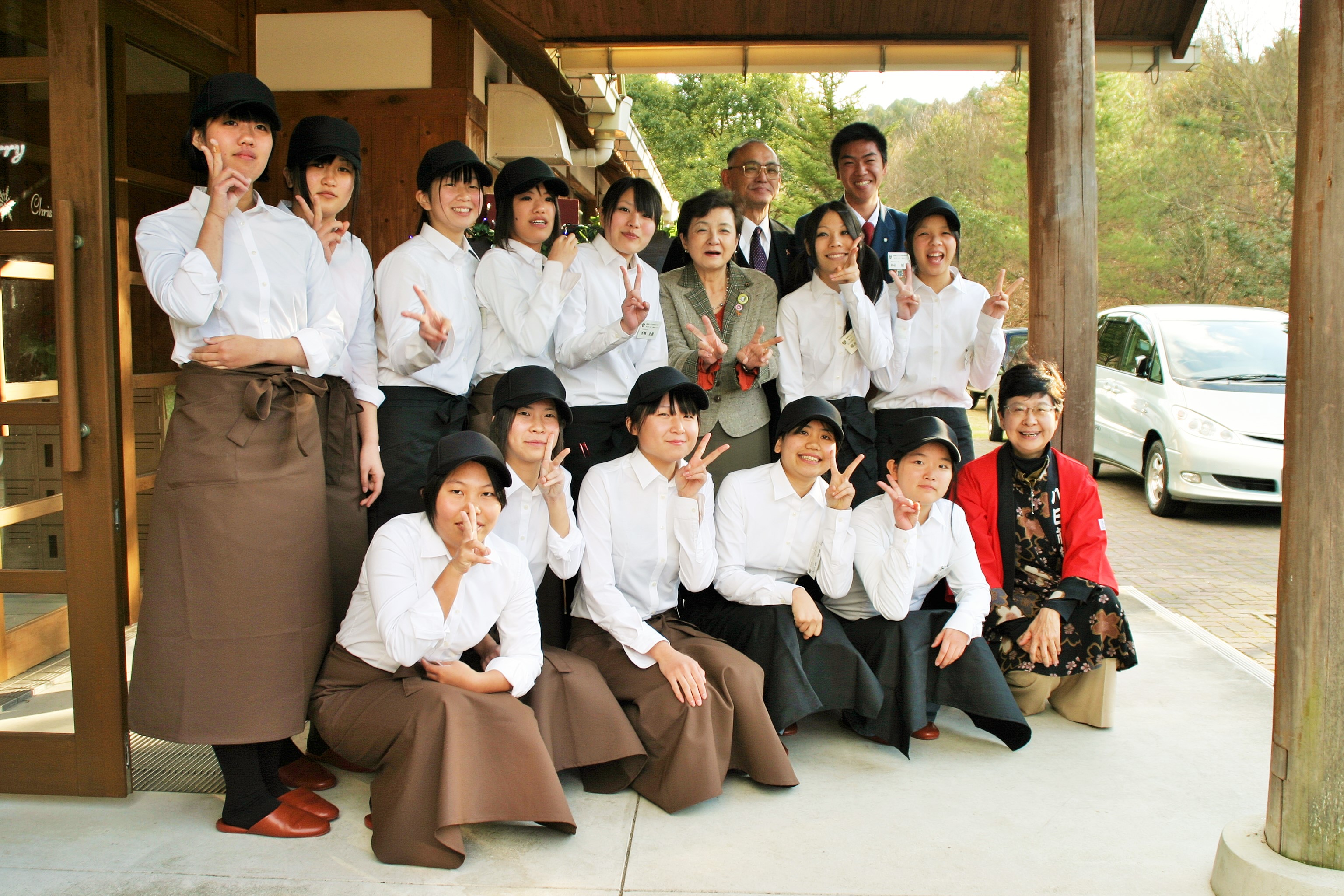 Mention “high school student restaurant” and the first thing that comes to mind is the restaurant of Oka High School in Taki, Mie Prefecture, featured in the television drama series “High School Restaurant.” But, did you know that such a restaurant also exists in Shiga Prefecture? The students of Yokaichi-Minami Agricultural High School in Higashiomi City, on the eastern shore of Lake Biwa, discovered their own value through “food,” the venue of a restaurant, and visualized that value for the community. The students themselves came to the realization that the rice and vegetables that they made every day in the classroom, and the safe and tasty ingredients, such as meat and eggs, obtained from the livestock they raised, should not be taken for granted, but rather were a valuable commodity worthy of delivery beyond school walls. An NPO active in the region came to the table, other local individuals joined the project through the NPO network, and school support grew across the region in an effort to make the restaurant a success. At the center of all of this activity were the high school students, the ones who played the main role.

With the decreasing birthrate and aging population, the rate of high school consolidation continues to increase as the number of students per classroom dwindles. Omihachiman City, Shiga Prefecture, being no exception, also once considered consolidation. The target: agricultural high schools. When the idea was first raised to consolidate these schools into regular schools, it was Ayako Fuji, representative of the Flower Project Network of the nonprofit organization “Sai” who put a stop to it. The Flower Project Network, engaged in regional revitalization, first started by taking a look at the current state of agricultural high schools. Tours of the local agricultural high schools bore witness to students who mastered skills while growing crops on a farm, and who then opened small markets to sell produce and processed foods, creating ties and connections with local citizens.

Plagued with doubts about the reasoning behind why such places of learning for students key to the regional community in the 21st century were to be eliminated, Ms. Fujii pondered with her colleagues at the Sai Flower Project about what could be done. The conclusion was drawn to make an appeal at the next prefectural assembly: agricultural high school students played a key role in the region and were a presence the region could not do without. Around that same time, there was talk of a private subsidy program. Ms. Fujii immediately discussed this program with the teachers of the agricultural high school. The teachers, however, were well aware of the school’s fragile existence, and the conversation did not continue as far as taking the gifts of the students beyond the school walls. Students are adding a final touch on the dishes

The students’ subsequent actions were remarkable. Discussions started from the bus trip home. What can we make? Let’s take on the challenge of a Christmas restaurant! And the talk went on and on. Ms. Fujii and the executive committee offered consultation support, such as pinpointing what the students had to offer, and held meeting after meeting, following the initiative of the students. Ms. Fujii happily recalls the time. “The stage was set. Discussions advanced and the students took the lead. We didn’t have to say a thing. They just thrusted their way forward.” In their efforts to learn about hospitality from a professional, the students received guidance from a hotelier, and proceeded to prepare for opening day.

Along the way, more transformations occurred. When the time came to create the menu, those students who were timid in the beginning were now independent and proactive. Additionally, whereas discussions on the high school student restaurant had previously been a part of class work and initially took place in a food distribution course in the high school, now various other persons in the school became involved. The students in the Art Department were put in charge of designing the sign that was to serve as the facade of the restaurant, and the Green Space Design Course helped with the table settings and decor inside the restaurant. The Green Space Design Course also built an oven using heat-resistant bricks made by applying Hachiman-gawara (Hachiman tiles), a local industry product, and cooked pizzas. Further, using the local purple root (Lithospermum Root) of Higashiomi City grown in class, the students made dyed textiles and added color to the restaurant in the placemats and coasters.

In the end, all courses taught at the agricultural high school took part in the endeavor. The entire student body got involved and the high school became as one, all proceeding forward toward opening day.

A student, who sharppened his customer support skill by a expert, is escorting the Governor of Shiga Prefecture to the reserved table.

Support to High School from the Local Community

The students who engaged in the endeavor to have fun and create a restaurant at last opened the restaurant “High School Student Restaurant of Local Cuisine” in Aikyonomori located in Higashiomi City for a two-day limited period from December 25 to December 26, 2010. Prior to the opening, the students received nearly 500 reservations, resulting in great success with a full house both days. The prefectural governor, as well as the superintendent of education, received invitations and got the full experience, from hospitality to cuisine, in the restaurant built from scratch by the high school students. The presence of such persons in the restaurant and the patronage from such a variety of people willing to support the community was a real boost for the high school students. The endeavor also gained the attention of the media, making the high school student restaurant of the Shiga agricultural high school a hot topic, increasing the number of prospective students and putting the talk of consolidation to rest.

What makes this initiative unique is the great amount of support received through the network of Ms. Fuji, including the Flower Project Network of the NPO Sai. Reflecting on the time, Ms. Fujii commented, “There were various groups and organizations surrounding the high school student restaurant, and it gradually became clear that the involvement of such persons would add to the fun. Simply linking the right people in the right places is all that was needed. Some of the people involved did things I had never even thought of doing, making everything all the more interesting.” Ms. Fujii also spoke about the key to expansion: “If the work is fun, people will enjoy the work even if asked to do it. I believe, in the end, everyone who got involved with the challenge taken on by the high school students had fun making a contribution.” The high school restaurant initiative supported by the local community led to real results, including employment in a local agricultural restaurant for agricultural high school students, and allowed the people involved, including Ms. Fuji, to witness firsthand the full potential of high school students. 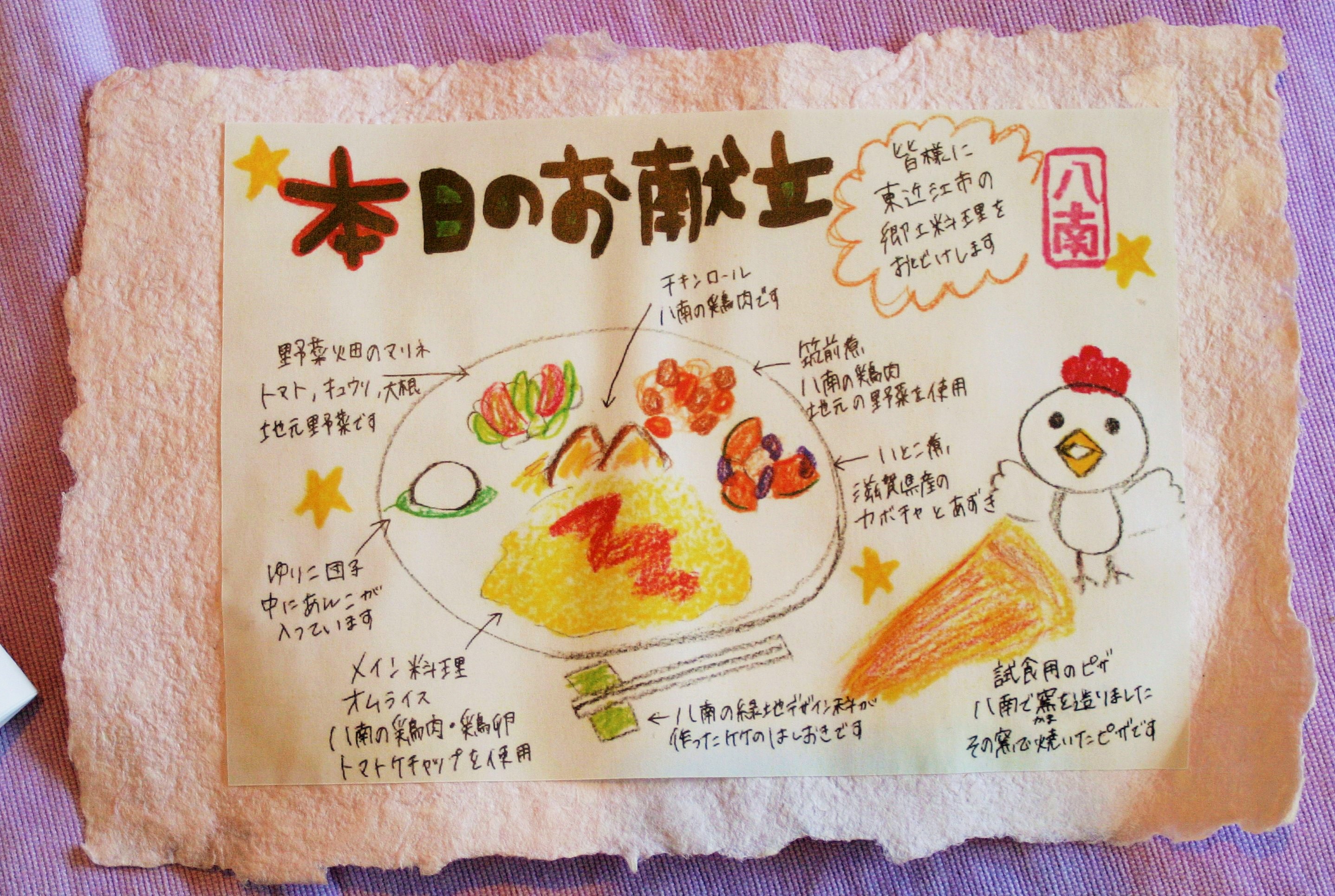 The menu of the restaurant consisted of various local food products was decided after a series of active discussion.

The agricultural high school is truly a place where meticulous attention is given to food. The tackling of “food,” i.e., a restaurant, by youth who will play a key role in local agriculture resulted in the recognition of the skills and potential of such youth by the community. So, why did this never happen before? Ms. Fujii points out, “(The persons related to the agricultural high school themselves) simply did not see value in what they did on a routine basis.” In addition, the people in the community never know the extent to which the agricultural high school students were involved in food. By creating a place to eat, the students created a place for students to practice tying together agriculture and cuisine, and a place for the community to experience the skills of the agricultural high school students. The Flower Project of the NPO Sai is already embarking on their next development to create environment for further collaboration of the community and high school, no matter how long it may take. The key to success has been identified as increased visualization. “People will naturally help out if you can paint a picture that conveys, at a glance, what needs to be done. It is the painting of the picture that we do. This picture must express what we are trying to do and be easily understood by everyone. A challenge, yes, but well worth it.”

Industrial high schools nationwide, including the agricultural high school addressed here, offer various different paths to creating ties and connections with local citizens through local business and regional development. Yet, without a design that defines who will do the coordinating, what arrangements need to be made, and how to do the funding, success will remain out of grasp. High school students lack experience in working closely with outsiders. Use of private subsidies is also a first for many. The entity being merely a school makes fundraising for such activities difficult. Perhaps we need to bring together strengths and abilities and facilitate local initiatives by encouraging schools from the outside. Then, if an initiative is continually needed in a region, ultimately have the region itself fund the project and support the initiative as a regional endeavor.

How to locally support individuals engaged in a food-based primary industry will most likely become increasingly important in the future. For agricultural high schools that are isolated and unaware of their own value, an initiative of providing “food” brings with it possibilities for creating ties and connections with a variety of persons in the community, as in thˆe high school student restaurant. In the case of the restaurant, it is important to note that success was achieved as a result of funding and organizational preparations as well as the full utilization of the network provided by the NPO. Such support is key to the expansion of such initiatives in the future. Lastly, we cannot overlook the efforts made by the NPO: the NPO created an opportunity that charged up and motivated the students and, while continually providing support, utilized a network to connect the driving force generated by the students with various local resources.

Interviewer and writer: Yasushi Okamoto (Editional Board of NPO no Hiroba)