Posted on October 01, 2015
by Yoshinori Yamaoka

*This essay was originally written for “Shiten-Ronten” (Our Perspective, Our Point) on the JNPOC Japanese website on June 21, 2012 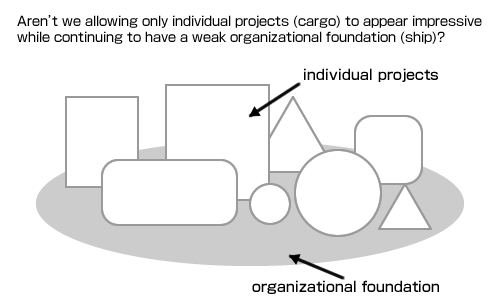 Since last fall, I have given more and more talks using charts like the one below. The audience seems to find them easy to understand, and their response has been generally positive. I have used different shapes and captions depending on the subject of my talks. Since I would like to further refine the chart’s design before deciding on a finalized version, I have refrained from presenting it on websites or in published papers. However, as I do not foresee an end to the revision process, I have decided to first publish the chart online in its current form.

The gray-shaded ellipse in the above chart symbolizes a ship. It may be a little hard to grasp, but it represents the organizational foundation of an NPO. One could also see it as a tray, but in considering the potential for developing a metaphor, I have regarded it as a ship. I have tried using other shapes that have a better resemblance to a ship, but the chart then starts to look complicated, so I have settled with the one above. The triangles, circles, squares, and rectangles all represent the various goods that make up the cargo. That is, they symbolize the NPO’s individual projects, including independent projects that have been initiated by the organization itself as well as those that have been commissioned by external organizations. What I would like to express through this chart is stated in the caption: “Aren’t we allowing only individual projects (cargo) to appear impressive while continuing to have a weak organizational foundation (ship)?”

The cargo (individual projects) can be easily spotted. It works well with the media; it gets written about in articles or reported in the news. It attracts funding more easily. However, things are different for the ship. Having a solid ship requires constant self-initiated and self-conscious efforts. Yet, there is no room or time to think about these things, so the ship remains fragile. Or, even after building a great ship, before long, the ship starts to deteriorate and one cannot keep up with its maintenance. Without meaning to offend anyone, I call ships like these “mud ships.” No one can tell when they might sink no matter how many impressive goods they carry. There are also ships that roam aimlessly, not knowing where they are going. Isn’t it the case that many of the NPOs in Japan are such mud ships? Aren’t there more and more such ships in Japanese waters?

Of course, the cargo is important. It is in transporting the goods that social missions become realized. Without them, we cannot receive payment for shipment. Then, it would be impossible to carry out even minimal work to repair and maintain the ship. However, if we continue to focus only on the cargo, eventually we would not be able to transport the cargo itself. The ship would no longer be able to withstand the weight of the cargo and sink.

The key to addressing the task of implementing programs and managing NPOs in the future is to recognize these mud ships (or perhaps they are rafts), and to think of ways to make them into great ships. It should be exactly for this purpose that projects supporting the concept of “New Public” exist. Accordingly, many organizations across Japan have started implementing projects to strengthen their organizational foundations. These efforts are indeed important. Yet, I wonder if they are inadvertently being channeled into creating an impressive cargo. Is the ship really going to become stronger?

The task of strengthening the citizen sector begins with individual NPOs recognizing their own mud ship. Each support center in Japan, including Japan NPO Center, has an important role to play in accomplishing this task. We also have a great responsibility. I would like organizations throughout Japan to first start by actively engaging in this mud ship debate.