“While teleworking has freed the visually impaired persons from the difficulties of the commute itself, in the workplace someone could help them when they need visual confirmations, but there’s no one to help them at home.”

While the work environment is changing dramatically with the spread of telework and digitization as a result of the COVID-19 pandemic, visually impaired persons have been greatly affected.

The opening comments were made by Mr. Masatoshi Shigeta, who is the president of Turtle, a nonprofit organization established in 1995 in Tokyo that supports visually impaired persons in the workplace. The active members are blind or have low vision and have faced difficulties in the workplace, and they strive to support the other members of the visually impaired community by utilizing their own experiences.

As of May 2022, Turtle has approximately 350 members, mainly visually impaired persons. The Vocational Development Center for the Blind and Low Vision in Japan (Shinjuku, Tokyo) has provided them their facility where Turtle base their operations. Turtle receives requests for consultations from all over Japan on employment issues for the visually impaired persons, provides advice according to people’s skills and vision, and connects them to appropriate organizations such as training facilities and vocational centers in various regions of Japan. Turtle engages in activities such as publicity, exchanges, and consultations, and has built up their experiences and expertise, using computers and smart phones actively. 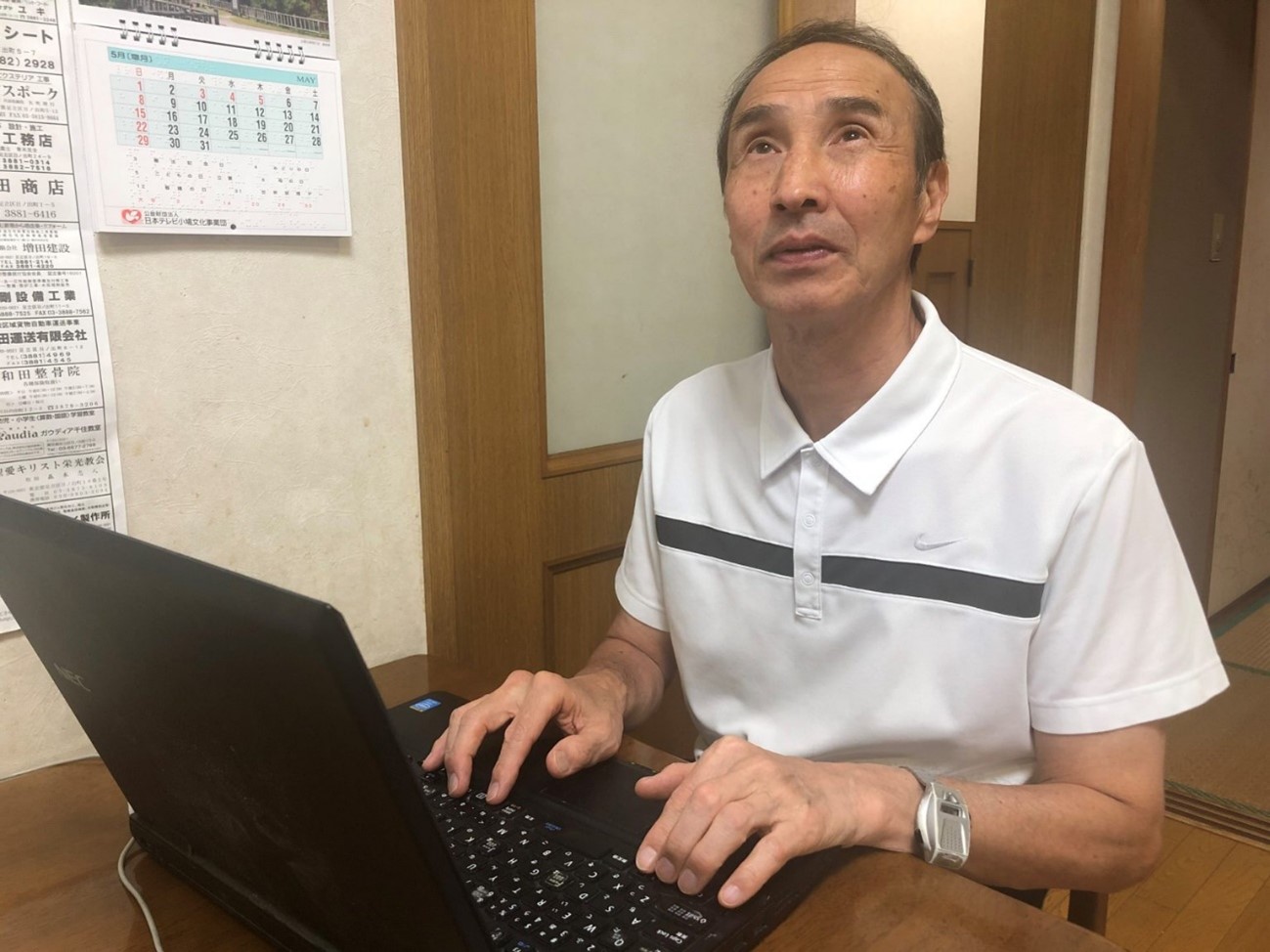 Mr. Shigeta demonstrating the functions of a computer customized for the visually impaired persons

Responding to requests for consultations from all over Japan

Through telephone calls and the internet, Turtle receives requests for consultations from all over Japan, with the number of cases totaling approximately 700 in 2021. Most were about vision loss associated with progressive eye diseases and about the continuation of work, but in recent years, questions about ICT (information and communication technology) have increased because of its significant progress and changes in the workplace. They are often asked about how to operate information devices designed for the visually impaired persons and how to apply the workplace information systems to the unique computing environment of the visually impaired persons.
Some are confused by the hot desking system, where employees do not have a fixed seat and can choose their workstation according to the nature of the job. It is essential for visually impaired persons to “borrow the eyes” of sighted coworkers, or to receive assistance from them on tasks that require visual confirmations, but to be able to do that, they first need to locate coworkers who can do that for them. However, with hot desking, they cannot search other staff members on their own because they do not know who is sitting where, and this makes it harder for them to get this necessary assistance.
Mr. Shigeta says that the telecommuting environment of visually impaired persons has been left behind, especially after the spread of COVID-19, and many are forced to stay at home due to the loss of work they can do. He mentions that teleworking, which is unfamiliar to the visually impaired persons, presents many difficulties because there is no one around to ask when they need help. He also feels that more people are mentally depressed perhaps due to the effects of the pandemic.
Turtle also hosts social activities such as the Turtle Salon where everyone is welcome to join, thematic salons focused on topics for each concern or issue, ICT-related topic salons, women’s groups, and skills improvement study groups to learn about work-related experiences and knowledge. Due to COVID, members cannot gather physically, but Zoom meetings made it easier for people from outside of the Tokyo metropolitan area to participate. In addition, Turtle continues to publish a PR magazine, disseminate information on their website, host lectures, hold consultation meetings with ophthalmologists, and compile a collection of employment cases and consultation records while protecting sensitive personal information.
In 2021, they launched the Turtle ICT Support Project with the goal to create an ICT environment where  visually impaired persons can work just like anybody else. The project is centered on making the portal site available, holding salons, and administering listservs. By becoming an information hub in the ICT field regarding employment of the visually impaired and by strengthening cooperation with support groups, corporate human resources departments, and people involved in system management and development, Turtle aims to improve the ICT skills of visually impaired persons and to create an ICT environment accessible to all visually impaired persons.

Technologies and realities of helping the visually impaired persons

Screen readers, which enable the visually impaired personsto use ICT equipment, are often utilized to read out text on the screen and to operate the computer using only a keyboard. Character magnification and black-and-white inversion functions are also widely used. Many use their own combination of software developed by different companies or choose one that fits their ICT environment. However, screen reader activation slows down the computer processing speed, which often interferes with work.

Turtle is actively conducting surveys in an effort to understand these situations. The Survey on ICT Difficulties in the Workplace, conducted between December 2020 and January 2021, analyzed 106 responses from visually impaired persons in various occupations. Of these, 84.6% experienced problems when there was “diversification of systems used in their work” and “no one close to consult with when there is a problem.” The most requested information was the “examples of ICT functions and utilization,” which reflects a wide range of real-life concerns, such as consultations on various devices (including smartphones) and text-to-speech for PDF files. Other areas that emerged to be in demand included information on screen readers, business systems, and Office operating information.

From November to the end of December 2021, Turtle also conducted the “Survey on the Windows Computing Environment for Screen Reader and Magnification Function Use” online. Using screen readers and magnification functions requires a computer with higher-than-usual specifications, so the survey asked about the actual specifications used and their comfort level.
They found that at least 8 GB of memory and SSD storage are desirable when using a screen reader in a Windows 10 environment. 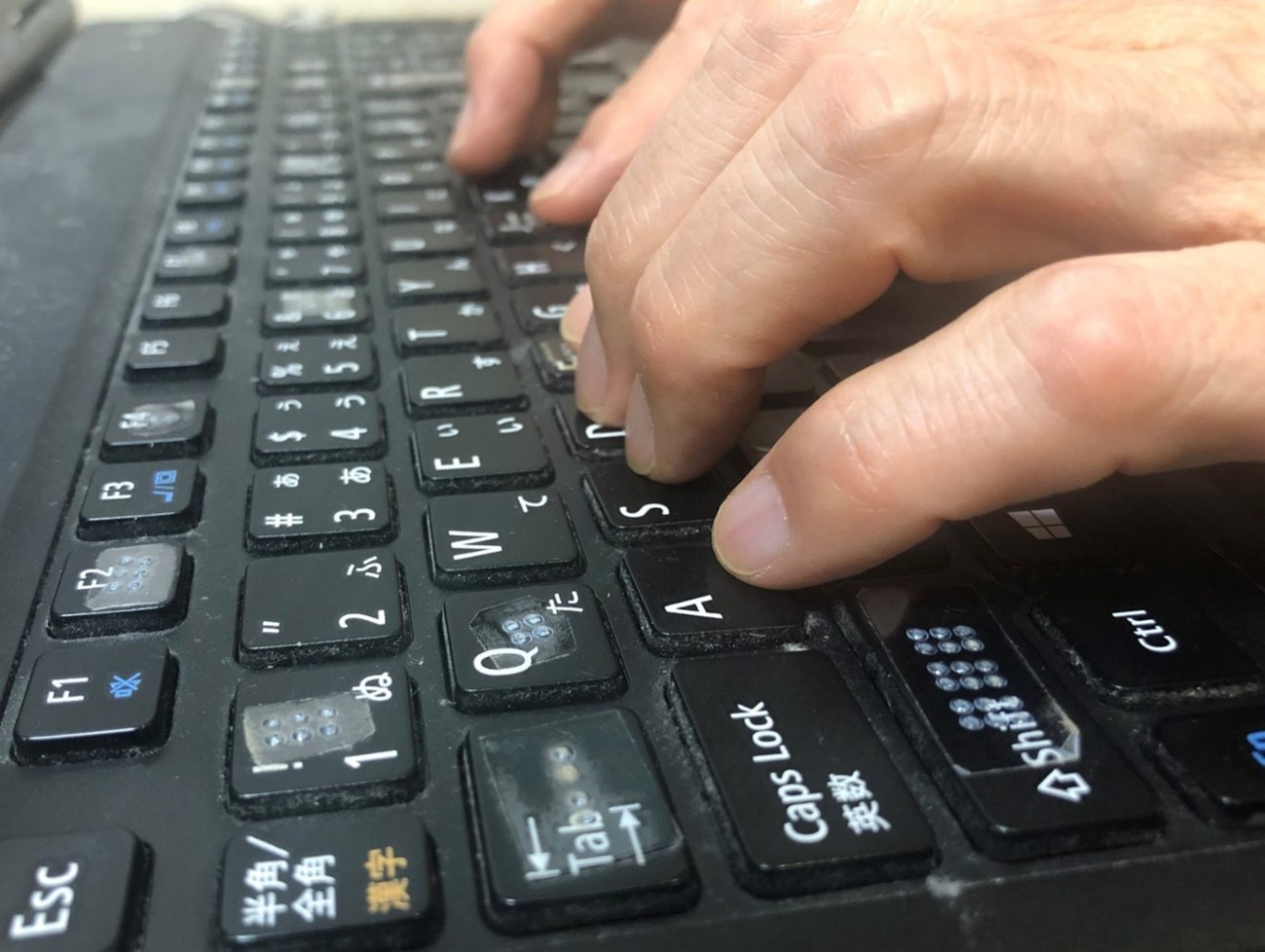 Operating a keyboard with braille and launching a screen reader

Mr. Shigeta’s Vision for the Future

“Instead of using braille, which only visually impaired persons can use, the development of screen readers allowed us to use the same text as the sighted, and it was a breakthrough for us as office workers. Recently—thanks to Zoom—I’m also grateful that I can hold meetings and exchange information without having to go somewhere else,” Mr. Shigeta says. On the other hand, he adds, “I’m concerned that the developments in accessibility have not kept pace with the rapid ICT development itself, so the workplace environment of the visually impaired persons has been left behind when it comes to the technological advances others enjoy.”

“We’d like to communicate our issues and requests to companies and researchers developing ICT tools and devices so that the work we can do in the workplace won’t be displaced,” says Mr. Shigeta who shared his prospect for the future. “Recently, more and more visually impaired persons are using smartphones to try to keep up to date with information technology. Its screen reader function doesn’t apply to images and videos so they can only use a part of its functions, but with more advances in AI that can serve as our eyes and explain things, I believe our lives and job opportunities will be expanded even further.”

Thoughts after the interview

I was impressed that visually impaired persons are making full use of computers and smartphones to carry out their activities. ICT helps people with communication and employment, and it opens up possibilities, but I thought that we needed to ensure accessibility for a diverse population. This interview also gave me an opportunity to reflect on whether I had been giving sufficient consideration to the needs of people with disabilities. It is my hope that learning more about the realities experienced by disabled people will lead to the creation of a society that is more comfortable to live in for one and all.