Supporting each other to prevent isolation among people living alone: Dendenmushi-no-Kai’s Chit-Chat Gatherings create connections and a sense of safety InsightsEssays: Civil Society in JapanVoices from JNPOCOther Topics

Supporting each other to prevent isolation among people living alone: Dendenmushi-no-Kai’s Chit-Chat Gatherings create connections and a sense of safety

The NPO Dendenmushi-no-Kai in Kumamoto City, Kumamoto Prefecture, promotes the creation of a community where people living by themselves—including formerly homeless people, the elderly, the disabled, and domestic violence victims—can live in peace. The organization holds chit-chat gatherings to prevent these people living alone from becoming isolated and to allow for interpersonal connections to be built. The participants come from all ages and walks of life, and these gatherings sometimes lead to more individually tailored consultation and support. We talked with Mr. Yuzo Yoshimatsu, the Representative of the organization, and Ms. Takako Nagata, the Executive Director, online and asked them about the ingenuity of the chit-chat gatherings and the thoughts that have gone into hosting them.

About Dendenmushi-no-Kai: Established in 2010 after the founders were shocked by the solitary death of a person who had moved from a homeless shelter to an apartment. The NPO (whose name is roughly translated as “Snail Society”) provides counseling, opportunities for social interaction, accompaniment to medical appointments and administrative procedures, job placement, and other forms of support in a companionate manner. In FY2020, eight staff members in cooperation with partner organizations conducted approximately 5,000 consultations.

–Please tell us how you came to host the chit-chat gatherings. 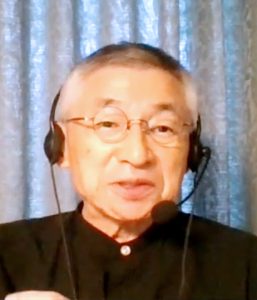 Mr. Yoshimatsu: Discussing how we can prevent solitary deaths, we realized that people who have moved into apartments have reservations, such as thinking that they will bother others if they asked for extra help, or that they had been taken care of enough when they moved in so they have to do the rest on their own.
As we were discussing this, a man with depression said, “I would feel safe if I had a place I could go to where I know there will be someone. I wish I had a place like that.” In response to this, we started holding chit-chat gatherings every Wednesday at the Kumamoto City Civic Support Center AiPort. Starting in FY2022, we have expanded to four locations.

–What do you do at the chit-chat gatherings? 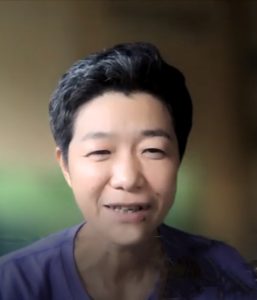 Ms. Nagata: You are free to stop by, sit down if you like, and leave if you don’t feel like staying. We don’t ask for the participants’ names or who they are. Through talking about mundane things, participants get to know each other. Instead of putting yourself on guard and trying to have them talk directly about their problems, we let them talk when they want to and listen to their problems as people share them.

Topics for the chit-chat include people’s favorite TV shows, favorite colors, and seasonal small talk. We pass around the microphone to each participant in turn. We ask volunteers, visiting students, and people who come to interview us to join as well. We try to make everyone feel comfortable, even if they are not good at talking, by telling them it’s all right to just say their name or to skip to the next person.

If people realize that whatever they say won’t be gossiped about or criticized, they become more inclined to talk. They start to say things that they won’t in their daily lives. 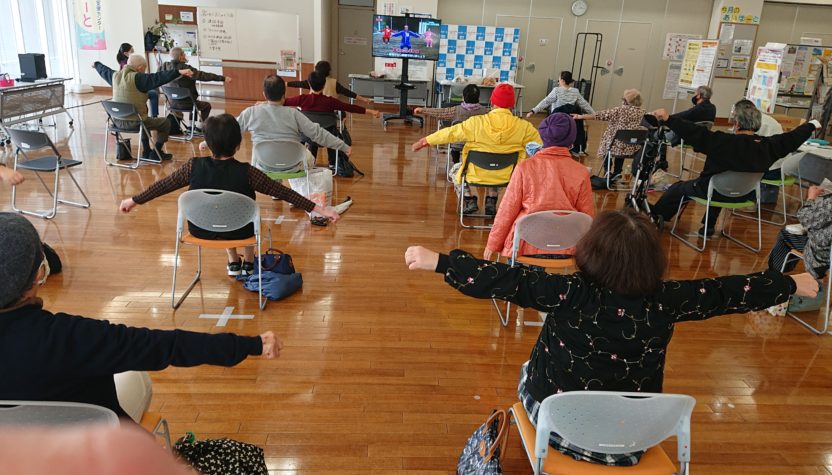 –How have the participants changed through the chit-chats?

Ms. Nagata: You would feel a great burden if you were only supported by others, but at the gatherings, just by listening to others talking, you’re already on the supporting side. Just by being there, anyone can be a supporter.

We once had a lady in her 70s, who started coming to our chit-chat gatherings after asking for a consultation with us. We invited her to a committee meeting for medical, welfare, and livelihood support groups as a member of the community for which these support efforts are intended. She talked about the importance of the gatherings at the committee meeting. And whenever there is a newcomer at the gathering, she would actively approach the person, telling them that everyone is a friend here and that they can talk without worrying, and offer them a seat. When people share the same feelings, they naturally listen and speak in a way that does not hurt others, without having to be taught how to do so.

–Please tell us what you do to get people to say, “Help me.”

Mr. Yoshimatsu: It is essential to establish face-to-face relationships. If you have such relationships, then you become aware that someone is not present at the gatherings, and you can ask them if they have any concerns and need help. Many men, in particular, can’t ask for help because they think “Men don’t cry,” or they must endure hardship and just live with it. We hear about how there are many more suicides among men in post-disaster public housing for the disaster survivors.

–We know that some people are not good at interacting with others and retreat to their own homes. Do you have any ways to encourage people to participate, especially those at high risk of isolation?

Ms. Nagata: One opportunity is when the person consults with us about a problem they are having. We believe it’s important for them to know that the door is always open to them even if they can’t attend the gathering.

Even if they can’t get out of the house, some still can make a phone call. They would call us, simply saying hello, and are relieved to know that we have connected again. After continuing this kind of communication, there are cases where people can come out of their homes spontaneously.

Mr. Yoshimatsu: Some people come when they are encouraged by their caseworker to participate in the chit-chat gathering, while others still won’t come. Still, it is vital for them to feel that if they want to, there’s a place to go. It is reassuring for them to know that we are always here. Even though we do not have any full-time staff at Dendenmushi-no-Kai, we split our time to make visits and phone calls.

–How do you define the condition of “not being lonely” in the first place? Where would be the landing point of social isolation prevention work?

Mr. Yoshimatsu: People who do have a house to live in but have lost connection with others may be considered “homeless.” I sense that the number of such people is increasing due to COVID.

We talk about providing support towards “self-reliance,” but this self-reliance often leads to isolation. If we have a sense of security that we are connected with others, we can be active in society and work hard even if we are alone. I cherish the phrase from a page-a-day calendar, which has daily words of wisdom, “I can be comfortable being by myself because I know I am not all alone.”

–Your organization also provides end-of-life care for those with no relatives. Having someone who can see you through the last days of your life is reassuring.

Ms. Nagata: Yes. The number of times we provide end-of-life care services has been increasing, especially after the 2016 Kumamoto Earthquake. When we send the deceased off, the funeral home understands that we can’t invite Buddhist monks for the rituals, but the members gather for about 30 minutes and send the deceased off. We sing songs that the person loved, and even if we don’t know the person very well, Mr. Yoshimatsu may talk about their generation.

Mr. Yoshimatsu: Those who live alone worry about what their final days will be – like what to do with their remains and whether anyone will send them off. We have probably sent off 30-40 people in the past 12 years. Sometimes we are asked to be the guarantor for someone we never met while alive, but we meet them at the funeral home and say, “It’s nice to meet you. Goodbye…” We do want to give a heartfelt sendoff nonetheless.

We once had an unforgettable case of a man who was separated from his family 30 years prior due to his drinking but was reunited with his family and taken care of right before he passed away. We also had a case of siblings, who had been fighting repeatedly and not getting along well, who made up before one of them died. Perhaps we are not so much a support organization but rather a pseudo-family that values closeness. 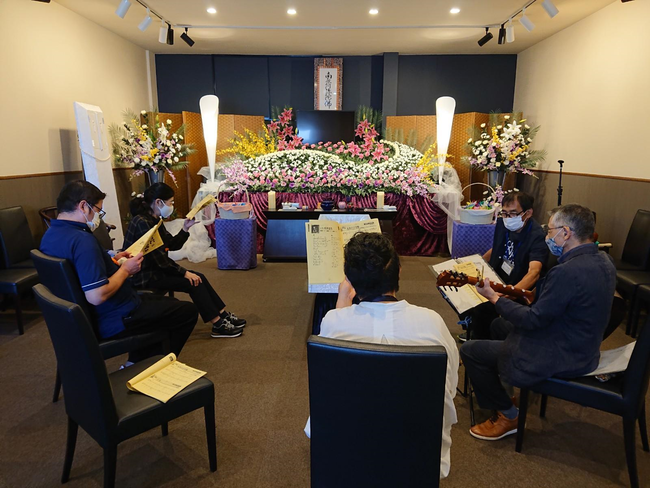 At a farewell party. Everyone sings together before the casket.

— I know it must be hard work to continue providing extensive accompanied support. Are there any nuts and bolts on how to keep things going?

Ms. Nagata: We do constantly experience a sense of crisis, but we also hear from our members who are concerned about our future, “What if Mr. Yoshimatsu is no longer around?” or “Dendenmushi-no-Kai is meant to do this and that, but isn’t doing them right now.” We try to engage such members by asking for a little help or to join us if they insist on that much. At the very least, I think we can continue to hold the chit-chat gatherings at a venue that we can use free of charge.
Of course, we would like to be supported by the minimum donations necessary to maintain our office and vehicle and to document our work. Last year we had no grant money and barely made it by soliciting monthly supporters (donors) and affiliate members.
Mr. Yoshimatsu: One time, a homeless man pointed at empty cans and newspapers on the street, saying, “This is trash, that as well,” and then pointed at himself, saying, “I am trash, too.” It struck deep in my heart. I hope that everyone, including myself, can be useful to someone else so that we do not turn people into “trash” that is disposable. I believe that what makes our activities sustainable is not only the money but also the people who are willing to take charge of playing some role in our activities and keeping them going. We are not the ones who help others; our members support each other, simple as that. There’s nothing to get worked up about. I think that’s what keeps us going.

Thoughts after the interview

It seems unlikely that we can easily find places like the chit-chat gathering where everyone can talk about their isolation just as it is and be heard with empathy. I found their activities to be very valuable. Of course, public support is important, but to prevent isolation, relationships that stay considerate of each other’s feelings, where people both provide support and are supported—just like the relationships among family and friends—may be indispensable.

Another thing that left an impression on me was this phrase: “Just by listening to others talking (at the chit-chat gatherings), you’re already on the supporting side.” Even though I cannot be as deeply involved as the staff at Dendenmushi-no-Kai, I think there are things I can do in my daily life, such as befriending my neighbors and helping out at community events.