We don’t need to think about gender roles anymore – The importance of a genderless work style that goes beyond masculinity and femininity InsightsEssays: Civil Society in JapanVoices from JNPOCOther Topics

At the end of 2020 there was a petition drive to change the name of a Japanese major convenience store, FamilyMart’s own brand for pre-cooked meals known as “Mom’s Cafeteria,” because of unconscious bias. I am one of those who signed the petition.

The issue was raised by a female high school student who participated in the Girl Scouts of Japan. She raised an alarm about gender consciousness in Japan as a whole, saying, “It’s not just the mother who cooks meals.“ In some households, fathers prepare meals and couples share household chores. The brand name Mom’s Cafeteria is not only prejudiced against women, but also against men who participate in the household.

Japan is a country where there is a strong fixation on gender roles, where men work and women do housework. This also has an impact on the Japanese work environment. I myself have seen and experienced cases where it is difficult for men to take childcare leave, and where married women are not promoted to management positions because of the priority they place on family.

However, I believe that if we eliminate gender stereotypes, most things can be done by anyone regardless of gender. If we can get rid of gender stereotypes and create a genderless work style that transcends masculinity and femininity, Japan will become a society where everyone can live more comfortably.

In response to this situation, Natsuko Hagiwara, a professor at Rikkyo University Graduate School, has been involved in the development of women-friendly cities and the Fifth Basic Plan for Gender Equality. We interviewed Prof. Hagiwara regarding various issues caused by the perception of gender roles in Japan, and the importance of genderless work styles.

Hagiwara introduced a survey result conducted by the National Women’s Education Center.
She noted, “I was shocked to see the results of the survey. When asked ‘Why do you think there are so few female principals in schools?’ one first grader answered, ‘Because men are superior.’”

Hagiwara said that she was at a loss for words when she realized that several children, including those in the lower grades, had been led to believe that their roles differed based on their biological sex, not on their individual abilities. There is still so much gender inequality in Japan that gender socialization sets in and unconscious gender bias fully takes root as early as elementary school. Hagiwara emphasized the importance of gender education for all generations, saying, “The gender consciousness of teachers, parents, and other adults around us is reflected in our children.”

According to the 2020 edition of the White Paper on Gender Equality, while the ratio of men and women participating in household chores is 1:1 when they are unmarried, the ratio increases to about 2.5 times for women after marriage. Men are also told that “men should work instead of going home,” or “it is good for the children if women are left to do the housework and childcare,” and there are many cases where companies restrict their participation in the home. These are also factors that contribute to “solo parenting.” In this way, when parents create a family environment where men work and women do housework, children unconsciously develop a sense of gender role division.

It is obvious that there is a gender gap in the work environment as well. The Equal Employment Opportunity Law, enacted in 1985, has given Japanese women equal opportunities to enter the workforce. However, the percentage of Japanese women in full-time employment is still less than 50% (as of 2019), and the wage gap between men and women is still very large, with the rise of “part-time employment” targeting women who cannot work full eight-hour days. In addition, the percentage of women in managerial positions is less than 10% due to so-called “Mommy Track” which makes it difficult for working women who are married or have given birth to receive promotions and raises.

In 2020, the economic impact of the COVID-19 highlighted the problems that employment status and low incomes cause for young women and single mothers in Japan. The number of female suicides in November 2020 increased by more than 40% over the same month in 2019.

Hagiwara said, “By reforming the structure to allow both men and women to take maternity and childcare leave, it will be easier to close the wage gap between men and women, as well as the gap in promotions and salary increases. In addition, it is important for men and women to be aware of and take responsibility for housework and childcare, rather than just helping out. Above all, it is essential to educate men from an early age to encourage their active participation in housework.

Will this trigger a change in gender role consciousness? Men’s participation at home

The pandemic has rapidly changed the way people work, establishing a telework system and an environment where it is easy to take time off. According to the survey by Meiji Yasuda Life Insurance, the percentage of married men and women who answered that they wanted to have children rose to 30.5% from 21.3% the previous year, and one of the reasons is that men have more opportunities to participate in childcare.
As if a tailwind blows, the government began to consider “mandating men to take childcare leave” and “establishing a paternity leave for men before and after childbirth” last December. This legislation is a measure to overcome the current situation where the number of employees who take childcare leave is not increasing despite the fact that the environment is such that it can be taken regardless of gender.
In addition to the legal system the Japanese government has been promoting, changing the work culture so that both men and women can easily balance work and family life will not only eliminate the perception of gender roles, but may also improve the birth rate, as shown in the Meiji Yasuda Life Insurance survey.
At the same time, however, there are issues for companies in hiring. Professor Hagiwara also emphasized, “If we don’t provide additional financial compensation, small and medium-sized companies suffering from labor shortages will continue to suffer.”  It will be necessary not only to introduce a system, but also to provide additional financial support to companies.

A genderless work style will enhance all peoples’ lives. 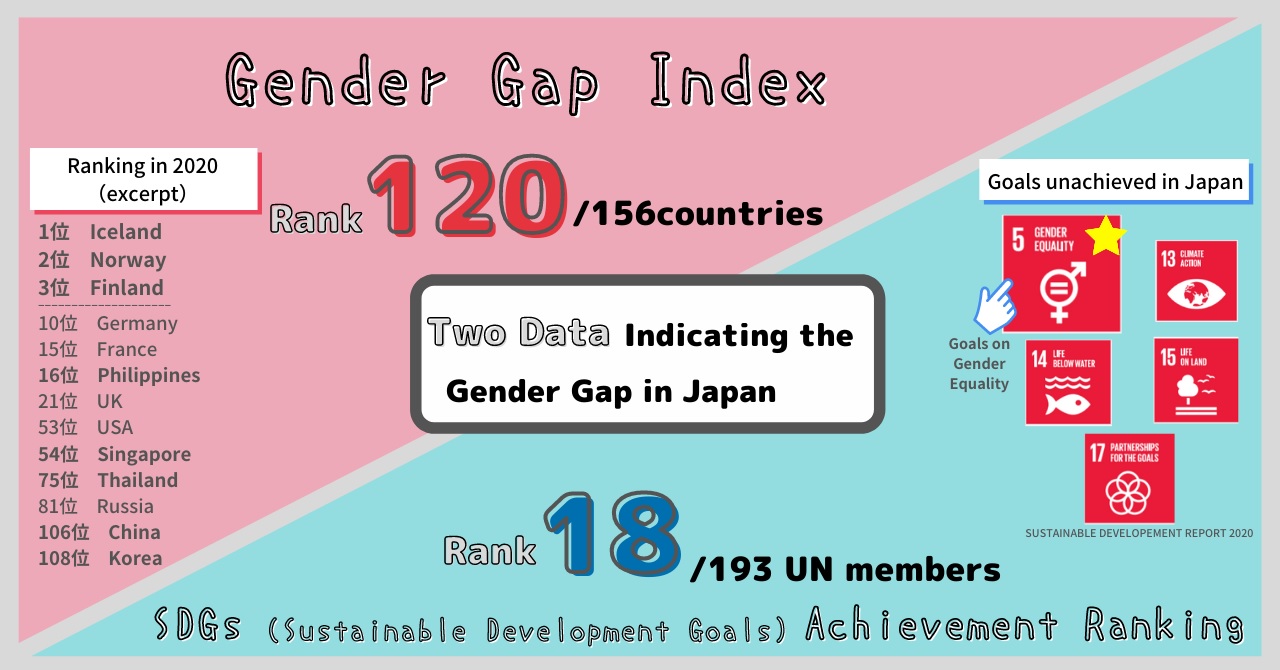 The idea that men work and women do housework persists and binds us in many ways.
Think about it. Before you know it, you’ve been influenced by gender stereotypes, and you’ve either given up and say, “It can’t be helped,” or your behavior has been restricted because you’re a man (or woman). However, there are men who are good at housework, women who are not good at housework, men who cannot drink alcohol, women who want to work hard, men who want to change their family name, and women who want to keep their own family name.

Last year, Japan ranked 121st out of 153 countries in the 2020 Gender Gap Index released by the World Economic Forum, which shows the social and cultural disparities between men and women. This was the lowest result ever. Additionally, in the assessment of the Sustainable Development Goals (SDGs), which aim to create a sustainable society where “no one is left behind,” Japan ranks 17th out of 166 countries (in FY2020), and it has been pointed out that Goal 5, “gender equality,” has not been achieved. In both cases, the lack of women’s participation in the decision-making process and the lack of improvement in the wage gap between men and women are major factors in the “impoverishment of women.”

Hagiwara said, “The issues that women are facing are hints for men to make their lives easier as well. Creating a corporate culture that considers gender equality and promoting work style reforms will lead to a policy of ‘leaving no one behind’ and a society where all people, young and old, men and women, people with disabilities, and LGBT people can live comfortably.” Eliminating the sense of gender roles and living a genderless life, which I raised at the beginning of this article, will be an effective means of encouraging men to enter the home and women to enter the political and economic spheres. The result will be a society where everyone can live and work better.

In order to achieve the goal, I believe that the first step toward a “genderless work style” is to respect others as “human beings” and to recognize diversity without being bound by stereotypes of “masculinity” and “femininity. To do so, I think it is most important for each of us to be aware of the prejudices that lurk in our daily lives and to respect each other’s values.