How Do We Build the Communities We Want, together? :Kohaku Future Center part2 Tohoku Interview: Community Building

The destruction caused by the Triple Disaster of March 11, 2011 was overwhelming. For some, everything they knew was taken away. What comes next? The past is gone. The future is uncertain. How do we build new lives?

Government cannot answer these questions. Government can rebuild what was here before, but what else is possible? What kind of future do we want? How do we build healthy and resilient communities which sustain and nourish our lives?

(*This article continues the story of the important work of Kohaku to help people in Tohoku build the communities- and the future- they want. ) 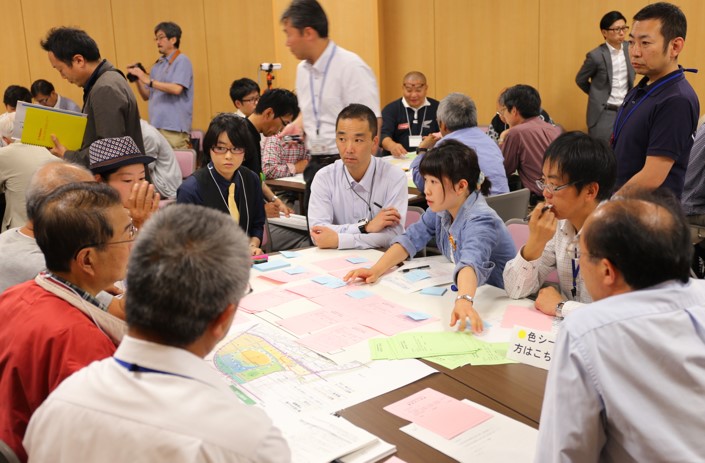 Kohaku supports Civic Pride Ishinomaki which is connecting local people to their love and pride in their community and asking them to visualize that love and pride as a souvenir.

What Iwai-san knows is that people must find their way back into enough relationship with each other that they can get stuff done. They don’t even have to like each other – but they do need to respect each other and their differences. And then make a path forward one step at a time.

A year after Kohaku was created, Iwai-san and I had a conversation about what is possible now.

By 2013, he said, reconstruction of hardware side started to become visible: fishing ports and factories to process fishery products, road construction plans and other things on the physical side. The phrase “creative rebuilding,” which was often said right after the disaster, has been taken over by just simple reconstruction. Some of the local fishermen and farmers were trying new ways of adding values to their business, literally practicing “creative rebuilding”, but when I came to have an overview of what local people and industries were doing, it seemed to me that the momentum “to jointly re-create the community to better places than before the disaster” had started to fade away. Or maybe I should say that many people had not had such an image from the beginning. I came to see, more and more, how long this work would take.

Most of the local people had enough on their hands only with rebuilding their own life. It was natural for them not to be able to imagine new ways of living, which is richer than the days before the disaster. In order to have such imagination, serious deep discussions and information sharing was needed across the sectors, including the governments, residents, agriculture, fishery, service industry, etc. But that did not happen.

All the rebuilding efforts after the disaster can be an opportunity to realize new ways of living and new styles of communities, proposed as the “Vitalization of Regions” initiatives by the Government, in advance of the other parts of Japan. But, so far, it seems that we need a lot more efforts and time to make it happen.

What is most important is for people in the communities to love and take pride in their communities. That pride is the source of creative ideas. I know many people have the pride in their community from the beginning. But efforts and time are needed to make people become aware of the pride within, take actions for the community, and cooperate with one another. It has been almost four years since the disaster, and the rebuilding of hardware has been making progress. But, on the other hand, negative aspects of time passing have been emerging. For example, the weak of society, who are having difficulty in recovering economically and/or mentally, are facing increasing challenges.

The key to create new ways of living and community, based on the strengths of Ishinomaki, is for all the Ishinomaki people to remember love and pride to the community and share them.

Building Community, One Conversation At a Time

So the work to build community continues. Kohaku is helping people make a new future now. Frankly, the work is frustrating and rewarding, energizing and exhausting. But Iwai-san keeps connecting people back to what they love. He keeps asking what brings them happiness. He reminds them to find joy. Here are some current examples of Kohaku’s work.

So the work to build community continues. Kohaku is helping people make a new future now. Frankly, the work is frustrating and rewarding, energizing and exhausting. But Iwai-san keeps connecting people back to what they love. He keeps asking what brings them happiness. He reminds them to find joy. Here are some current examples of Kohaku’s work. 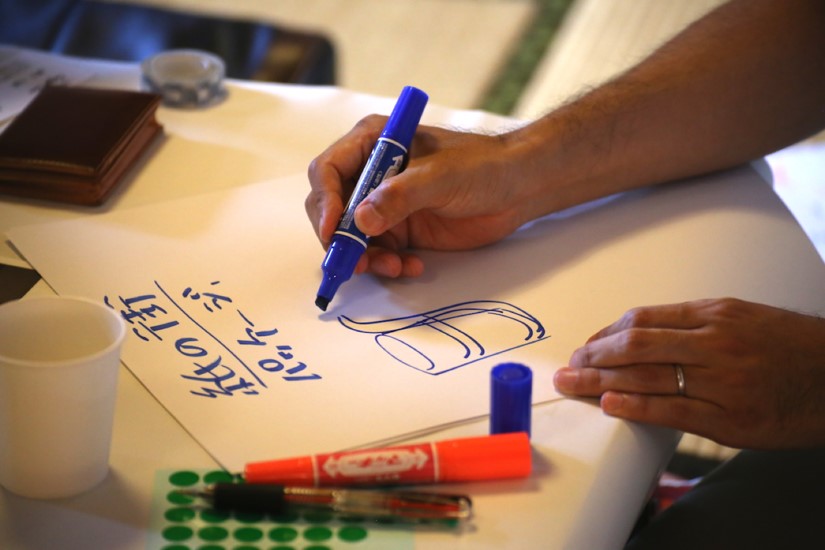 Kohaku supports Civic Pride Ishinomaki which is connecting local people to their love and pride in Ishinomaki and asking them to visualize that love and pride as a souvenir. The souvenirs catalyze a sense of oneness among the residents and invite more interests from outside. Kohaku creates meeting spaces – 場 – where people can share their honest feelings with each other. They meet, they talk, they drink tea. They talk with each other, remembering the past and seeing the future.

The Minamihama Memorial Park is scheduled to be open in the spring of 2021. It has been a hard, emotional time. The long-time residents have mixed feelings about the park plan because 400 people were lost in the area, and another 150 people are not found yet. Something special was needed to help these people to plan the best possible park as possible together with the city, prefecture, and central governments. Kohaku, together with the local leaders, supported the governments to have constructive exchanges with the citizens by designing and facilitating the related workshops. 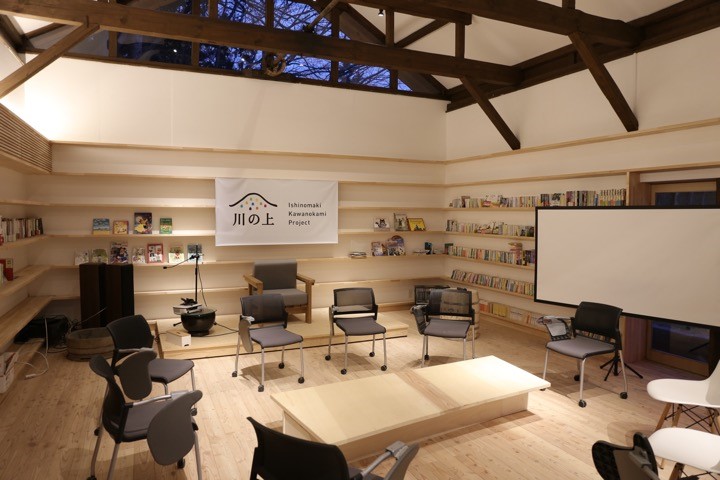 The Kawanokami Project is another challenging but important project Kohaku has been involved.  In the Kawanokami area, permanent housing for two very different communities – Okawa and Ogatsu, both decimated by the tsunami, is being build. People from these areas are farmers and fishers and it’s been hard for people from such different backgrounds, to easily communicate with each other. They don’t know each other’s cultures and all of them would much rather be in their old homes!  A wise community leader said we need a場 where we can get to know each other and start working together. And then he said I know the right place. He arranged for the use of an empty rice storage building and together the community raised money to turn it into a new center for this community. Kohaku supports this center as one of the operating committee members.  From fiscal 2016, Kohaku will design and facilitate a series of conversations among the residents in the Kawanokami area– both new and old –for them to build a better life together. Of course, Iwai-san has discovered that be needs to take care of himself if he’s going to do this work for the rest of his life. He must see to his own happiness. And he’s woven his love of motorcycles into a way to connect people with the deep beauty of Tohoku through “Go For Ride In Tohoku!” which aims to keep the memory of the 3.11 alive and to showcase this incredible region. Motorbike riders from across the country come to tour along the Sanriku Coast in Aomori, Iwate, Miyagi, and Fukushima. A successful pre-event was held in 2015 and this year a full program is being offered to tour along the Sanriku Coast from May to October.

These are small steps. And they show a new view of how change happens. I’m sure there are times and places for master plans – including a lot in Tohoku right now. But plans only build what we know and see. They mostly re-create the past.

But we need to be co-creating a future, NOW. We do that when we figure out what’s really important to us – what it is that brings us joy – and come together with others who care to figure out how to make it happen! When people come together in this way, there is a delicious taste in the air. More laughter. People looking carefully and kindly at each other. Passion. The confidence that we have vision, relationships and a place to start.

Kohaku creates this space for co-creating a future. The space for exploring what is possible now.