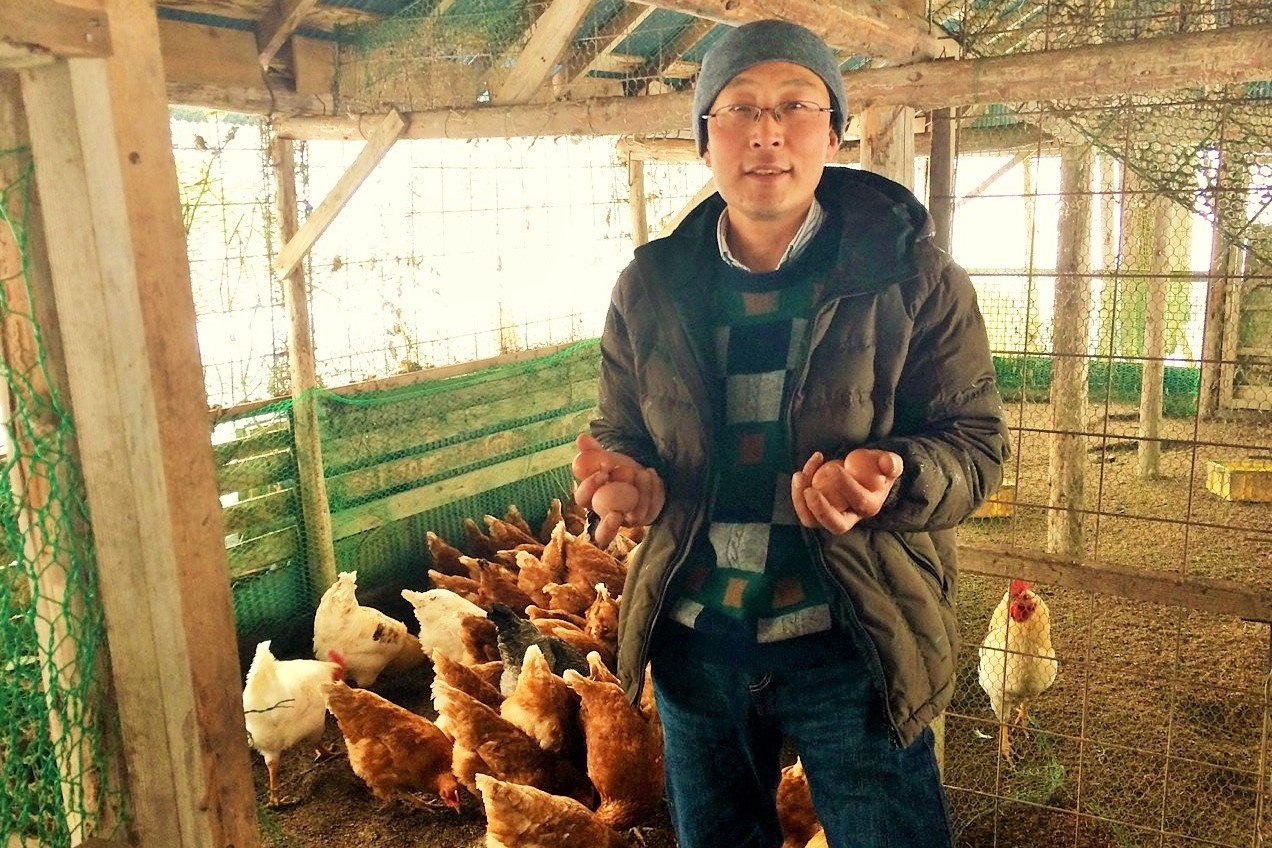 An organic farmer, Asami-san in his broiler house in Aizu, western part of Fukushima.

Five years have now passed since the unprecedented triple disaster of earthquake, tsunami and nuclear disaster struck Tohoku, Japan, on March 11, 2011. To commemorate the anniversary of the Great East Japan Earthquake, the broadcast and print news media covered many stories depicting how things have changed (or not) due to the reconstruction efforts. The Japanese government previously declared the first five years after the disaster as a “Concentrated Reconstruction Period” with 25 trillion yen (approximately $220 billion at today’s rate) poured in for reconstruction. The next five years have been designated a “Reconstruction and Revitalization Period” for which 6.5 trillion yen ($58 billion) has been allocated [1].

Top items reported in the coverage for the five-year anniversary were the delay in housing reconstruction in Iwate and Miyagi – the two prefectures whose shorelines were devastated by the tsunami – and the ongoing angst experienced by residents of temporary housing, many of whom are elderly. Less highlighted was the fact that the recovery is much slower in Fukushima due to both the real and perceived radioactive contamination.

Japan NPO Center’s efforts to support those affected by the 3.11 disaster have included helping Fukushima farmers, especially those who have formed non-profit groups to rebuild their farms and reinstate their tarnished reputation – a task that has so far proved very difficult. Fukushima fresh produce still carries a stigma that seriously affects sales. Noboru Saito, who manages his currently 6-hectare family farm in Nihonmatsu, 50km away from the Fukushima Daiichi nuclear plant, is among those affected, and one of the few who has strenuously fought back.

Because of the reputation of contamination, fresh produce from Fukushima quickly disappeared from supermarkets after 3.11. Farmers in Fukushima were initially not sure if they could continue. Eventually, many of them did, with supportive consumers and scientists on their side. During the first 1-2 years after the disaster, scientists established how much of the contamination in the soil (cesium in particular) transferred to crops and found out that it was actually an astonishingly small portion (this was termed the “Fukushima miracle” by Professor Kiichi Nakajima [2]). Still today, however, vegetable crops and rice produced in Fukushima are closely examined for contamination. Since the disaster, following every harvest season in autumn, all rice bags from Fukushima farms have been inspected to check their level of radiation (each bag contains 30kg of rice). This is not a sample inspection – rather all bags are inspected. More than 10 million bags(!) were inspected in the 2015-16 harvest season, with the result that none showed more than the safety standard level of 100 becquerel/kg of radiation and only 0.006% showed more than 25bq/kg [3].

Would you buy Fukushima produce?

The tragedy of Fukushima is that these figures do not necessarily work to assure the safety of rice crops. Some vehemently dispute the accuracy of the inspection results and others do not believe that the safety standard set by the government is indeed safe. Still others refuse to purchase Fukushima produce no matter what. Many retailers switched from Fukushima rice to other sources after 3.11 and have simply not switched back. Whatever the reason, Fukushima rice still does not sell today.

Saito-san does not hide his feelings of despair. He says that he has been doing all he can since the disaster – first to reduce the level of contamination in his rice paddies and vegetable fields and then to make sure that all crops shipped out have non-detectable levels of radiation. The meticulous and disciplined handling of the situation by Fukushima farmers such as Saito-san at considerable risk to their own health (many of them, especially young women, carry a personal dosimeter to measure the cumulative amount of radioactive exposure) have made it possible to demonstrate that rebuilding Fukushima’s agriculture is actually a realistic way forward. In so doing, Saito-san laments, “We have to carry the burden of proving that our produce is safe even though we ourselves were victims!” 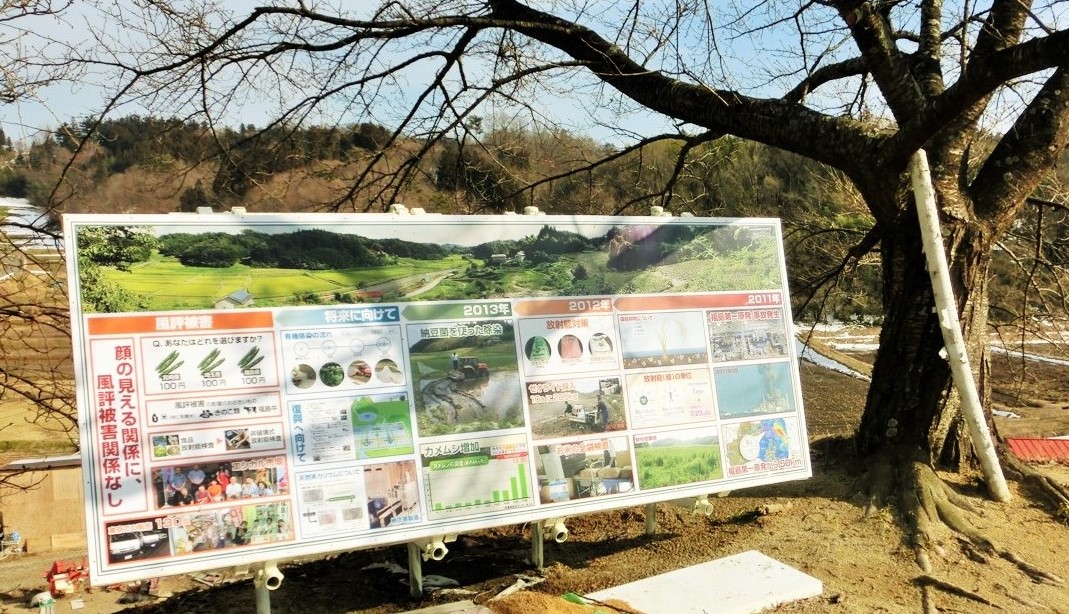 Saito-san set up a panel in his field to explain what he has had to go through to prove that his rice and vegetables are safe.

Many Fukushima farmers have stopped farming

His panel stands on a small plateau of land overseeing the nearby vicinity. He explains that at the time of the disaster, his field was 0.4 hectares in size. Now he and his small staff cultivate 6 hectares of rice and vegetable fields, 15 times larger than five years ago. This is because his neighbors stopped farming and entrusted him to cultivate their land. Giving up farming is a common phenomenon seen all across Japan these days. Agriculture as a business is hard to sustain, especially if you own a small family farm. According to the Ministry of Agriculture, Forestry and Fisheries, the number of people whose main occupation is agriculture has decreased from 3.5 million in 1985 to 2.4 million in 2000 and 1.9 million in 2011, with the percentage of farmers who are 65 years or older increasing from 19.5% to 51.2% to 59.1% respectively [4]. In Fukushima, the disaster has definitely accelerated this trend. Saito-san and other farmers were able to fight back and “decontaminate” their rice by experimenting with measures such as sprinkling potassium (as much as 800kg per paddy), but this was a lot of work. Saito-san’s neighbors, most of whom were elderly, were not able to undertake this extra labour. Indeed, farming requires a lot of physical labour regardless of the additional challenges caused by the nuclear disaster and the farming population is aging all over Japan. Saito-san fears that Fukushima may be an unfortunate harbinger of the outlook for agriculture in Japan over the next 10 years or so. 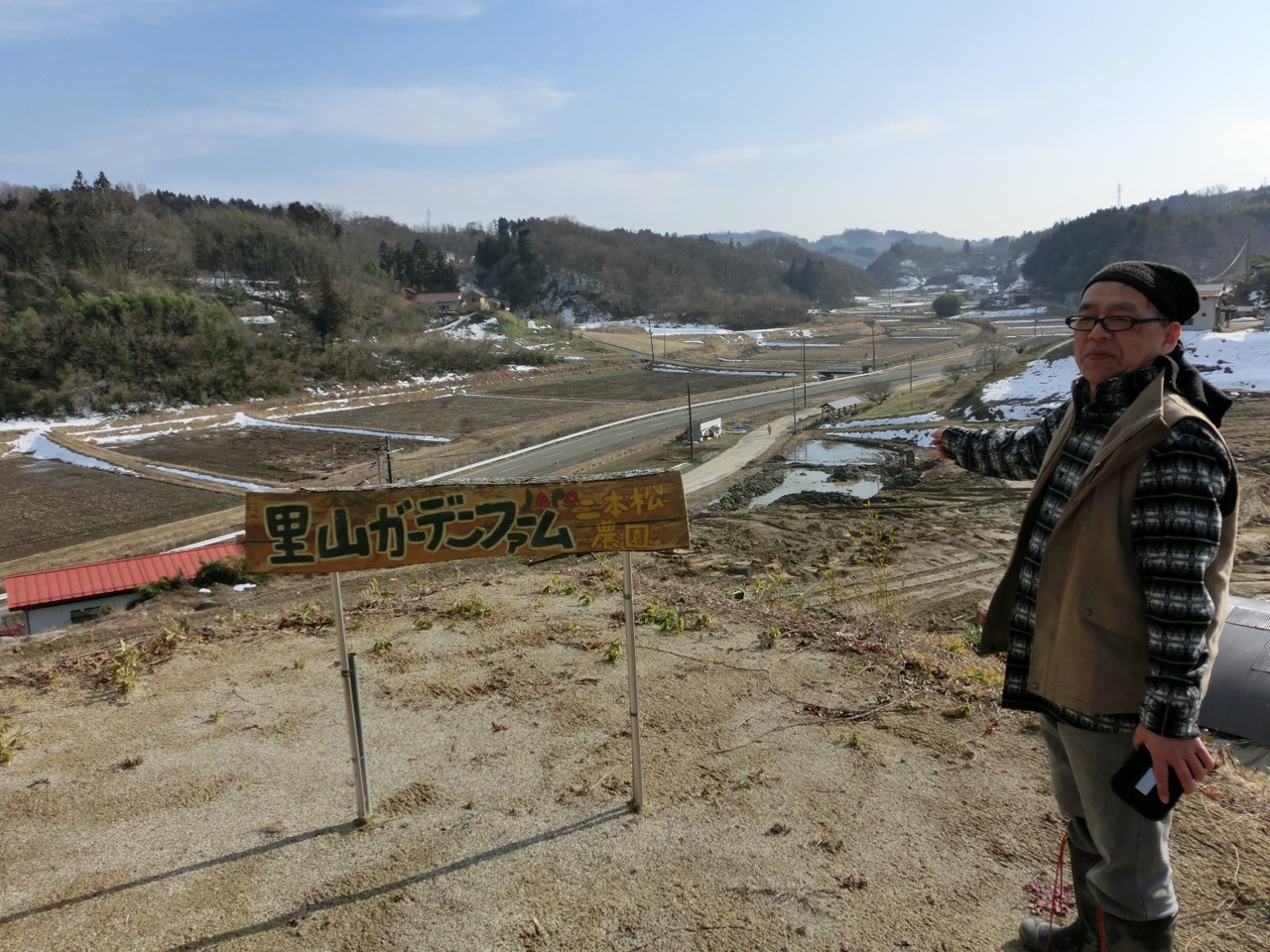 Saito-san explains how his neighbors stopped farming and that he takes care of their patches of land.

After the disaster, Saito-san and his fellow farmers formed a non-profit organization in 2012 – Ganbaro Fukushima Nogyoshato no Kai (Fukushima Farmers and Supporters Unite!). Currently it includes 50 farmers who sell their produce collectively online and the consumer base is growing. This is direct marketing that appeals directly to conscious and supportive consumers. To make the most of this direct communication, the organization website describes who grew what crop and how, and other relevant information about the farmer and her/his environment. Saito-san regularly updates his blog and tries to convey what is happening to his farm as well as his thoughts and messages. He is also using this platform to reach out to corporations to ask their cafeterias to use Fukushima vegetables. This collective approach is gradually paying off.

When the disaster struck in 2011, Saito-san was also executive director of another non-profit organization, the Fukushima Organic Agriculture Network (FOAN). FOAN was formed in 2009 to promote the sharing and exchange of information and skills and networking among organic farmers in Fukushima and other prefectures in Tohoku. Among Fukushima’s farmers, interest in organic farming was already relatively high, and they saw the formation of FOAN as an opportunity to strengthen their efforts. Then 3.11 changed everything.

The irony was that consumers of organic produce and supporters of farmers who belonged to FOAN were the first to pull out after the nuclear accident. Precisely because they were the most sensitive consumer cohort when it comes to food safety (which is why they were consumers of organic food to begin with) they could in no way risk taking nuclear-contaminated food. According to Akihiro Asami, the current executive director of FOAN and an organic farmer in Aizu (in the western part of Fukushima) himself, there is, however, a silver lining to the whole tragedy. He says that new consumers of organic crops from Fukushima are growing in number. Not only do they eat Fukushima crops but they also visit Fukushima, experience farming, stay in farm inns, cherish the scenery and enjoy exchange with locals. The disaster made these new consumers pay attention to what was happening in Tohoku and they found something important there. Asami-san characterizes this as the nurturing of a new urban-rural relationship.

Returning to one’s rural hometown is called making a ‘U-turn’, stopping on her/his way back and settling somewhere else is called making a ‘J-turn’, and moving from an urban to a rural area is called making an ‘I-turn’. Asami-san himself is an I-turner. He was a businessman in Chiba and decided to move to Aizu to become a farmer 18 years ago. Something similar may be happening to the new loyal supporters of FOAN, though few of them will eventually move to Fukushima. Most of them will stay in Tokyo or other urban places with occasional visits to Fukushima as a second or third hometown. And as they speak to their friends about the experience, food and people in Fukushima, gradually supporters grow. In essence, these supporters become cheerleaders for Fukushima, which is exactly what Fukushima needs, Asami-san says. Indeed, they are what all rural communities in Japan need as they struggle with depopulation, aging and community disintegration.

Asami-san does not only farm. For the past 15 years, he has cultivated the urban-rural relationship by organizing an annual event of rice paddy waterway cleaning for urban visitors. Many of them come back year after year with their families and friends. He also ran for mayor of Kitakata city, where he lives (but lost). He says that there is a qualitative difference in FOAN supporters pre-and post-3.11. Before the disaster, most FOAN supporters were food safety-conscious consumers of what FOAN and its farmers provided. Post-3.11, he sees that new supporters of FOAN want to play a part in re-building communities in Fukushima, and at the same time are re-assessing their own priorities, way of life and values. They are questioning the very lifestyle in which one’s work and economic interest is at the center of life, even though many of them had been questioning it long before the disaster. For them, 3.11 served as an opportunity to actually stop their ‘train’ that had been running on a well-worn and established albeit dubious track of economic prosperity and security.

What happened in Fukushima cannot be undone, but because of what has happened and what they have had to go through, Fukushima’s farmers now have new supporters. They share the values of self-sufficiency, community and sustainability with those urban dwellers who feel they have found a new home in Fukushima.

After five years, people in Fukushima are still suffering and it is not easy to see positive signs. Things will never go back to normal.  Ask Saito-san, Asami-san and other Fukushima farmers, however. They do not intend to go back. They intend to build something new – and they are doing so.