It has been a while since the globalization and borderlessness of social issues have been brought to our attention. It is often the case that hints and resources for solving social issues are readily available from organizations in other countries that are working on similar issues. However, the exchange between organizations (NPOs) in Japan and their international counterparts has not progressed much due to the fact that neither side knows about the existence of the other, or, even if they do know, there exists some formidable language or cultural barriers. In fact, through our overseas connections, Japan NPO Center has always wanted to overcome these barriers and make efforts to share knowledge among organizations that are working on common social issues across borders. At this time, we had a chance to make this happen through our Japan-U.S. Exchange of Local Human Resources Project.

This Japan-US exchange program has been undertaken over the past several years in some variation with the aim of sharing knowledge and learning from each other to tackle issues common in both countries. In FY2020, a six-month project on the theme of aging of local communities was conducted in collaboration with Caravan Studios, a division of US-based TechSoup. Caravan Studios has been developing social good apps and tools based on the needs of local communities while also making the most of the knowledge that already exist within these communities. Their approach is characterized by the fact that the local community, rather than IT specialists or technicians, identifies its own local issues and needs, and designs methods and IT tools to solve them. The main goal of this particular Japan-US exchange project in FY2020 was to have local Japanese leaders experience and learn Caravan Studio’s tried and true “community-centered design approach,” which has been implemented around the world over the years, so that they can apply it in their own communities. Representing their local communities, eight people—including leaders of NPOs across Japan as well as those affiliated with a local government, university, and civic tech—participated in this bilateral yet collaborative and interactive project. 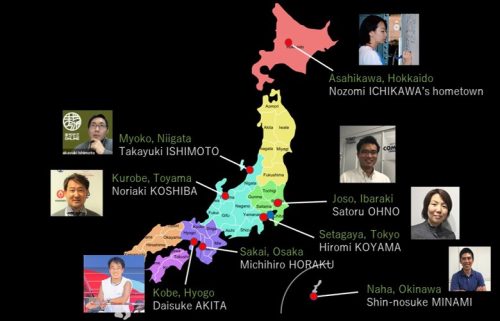 Due to the spread of COVID-19 right as we were to begin this project, we organizers had to rearrange the originally planned face-to-face workshops approach into an entirely online process with asynchronous individual work and three workshops.

The first phase of the project started with the visualization of the situation, in which the participants were asked to do some online research on the current issues and resources in their own local communities. Based on this landscape research, they then generated their own design questions (in the form of “How can we…?”) and corresponding ideas to answer the questions, and finally designed a lo-fi app (prototype) based on their selected ideas. 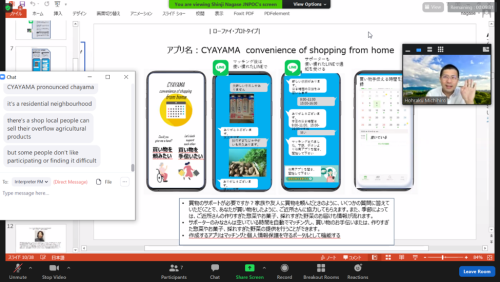 App pitch by a project participant

That aside, to my delight as an organizer, the participants experiencing the whole design journey process also gave encouraging feedback that this US-originated yet localized community-centered design approach can be used in a variety of situations in Japan, such as in the process of regional and action planning or for business improvement within their organizations. I would like to invite the readers to check out the actual apps designed by the participants and the methods used in this project at the special project website.